"I feel spiritual and believe in a sense of purpose or meaning in my life; and I see my place in the grand scheme of the universe and find meaning in everyday life." Become Aware Of Your Strength Understand what spirituality is all about so you can begin recognizing it in yourself and others.

As is true for many of the character strengths in the VIA Classification, the strength of spirituality has many dimensions. Some of these include meaning, purpose, life calling, beliefs about the universe, the expression of virtue/goodness, and practices that connect with the transcendent. Spirituality has been defined consistently by scientists as the search for or connection with “the sacred”. The sacred might be that which is blessed, holy, revered, or particularly special. This can be secular or non-secular: sacredness might be pursued as the search for a purpose in life or as a close relationship with something greater; the sacred might be experienced in the forgiveness offered by a child, a humble moment between a leader and a subordinate, an awe-inspiring sunset, a profound experience during meditation or a religious service, or the self-sacrificing kindness of a stranger. As a character strength, spirituality involves the belief that there is a dimension to life that is beyond human understanding. Some people don’t connect this belief with the concept of a divinity and prefer to think of it in terms of a sense of meaning rather than spirituality, but in the VIA Classification the terms are considered closely related. Spirituality is believed to describe both the private, intimate relationship between humans and the divine, and the range of virtues that result from the relationships. Spirituality is universal. Although the specific content of spiritual beliefs varies, all cultures have a concept of an ultimate, transcendent, sacred force.

Which virtue is this strength?
Spirituality is a strength within the virtue category of transcendence, one of six virtues that subcategorize the 24 strengths. Transcendence describes strengths that help you connect to the larger universe and provide meaning. The other strengths in Transcendence are appreciation of beauty & excellence , gratitude , hope , humor , and spirituality .
Transcendence

Explore and Apply Your Strength 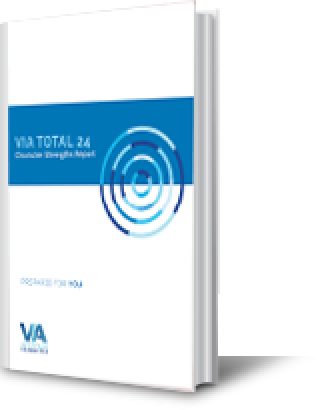 Where does Spirituality appear in your Character Strengths Profile?

Research findings on the benefits of the strength of spirituality found spirituality, through the expression of religiousness or sense of meaning, provides a sense of being grounded, increases optimism, and helps provide a sense of purpose for life. These in turn contribute to an overall sense of well-being. Learn how to activate this strength and all of your other strengths with your personalized Total 24 Report.
Learn More